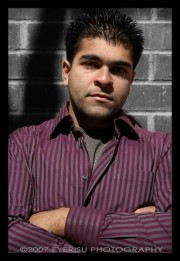 It all started with Grandmaster Flash...

On an evening in 1994 at the age of eight, DJ Kamoflage saw Grandmaster Flash on the original Arsenio Hall Show. Staying up past his bedtime, DJ Kamoflage was able to get a glimpse of a clip of Grandmaster Flash exhibiting his skills. Unexplainably, he became immediately fascinated by the turntables, scratching, and the art of DJ'ing. A few weeks later, DJ Kamoflage's parents opened up a savings account for him with $25 in it and he started saving up to buy his first DJ equipment.

Continuing to be inspired by music, DJ Kamoflage joined a breakdancing crew in middle-school but found himself more interested in being the DJ for the crew instead of dancing. After about a year of cutting some rug in Adidas jumpsuits, he realized he had saved enough money and bought his first DJ set at the age of 13.

Shortly after purchasing his first set of turntables, DJ Kamoflage became focused on "battle" DJing which is more oriented toward scratching, juggling and breaking beats. While still in his first year of the artform DJ Kamoflage was offered his first party gig. This opened up his mind to becoming a party DJ and he began sharpening his skills towards mixing records, song selection, and hyping up a crowd. As the years went on, the two skill sets indefinitely complimented each other and DJ Kamoflage found new ways to use both in a way that overall enhanced his performances. The combination of these abilities and skills have withstood the tests of time. 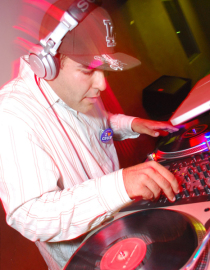 He quickly realized that his biggest talent was reading a crowd. DJ Kamoflage's ability to look at an audience and telepathically connect with them through music is unlike any other. He is able to control any crowd, mix virtually any type of music, play in any venue, and even use mutiple different equipment setups. This ability to adapt to his surroundings and his militant persona is what gave him the name: KAMOFLAGE.

In the early stages of college, the party scene began to grow rapidly. This opened the door to new opportunities and possibilities that were not available before and enabled DJ Kamoflage to start performing at a wide variety of events. He became the DJ for hip-hop group I&I and as his popularity grew, so did his coverage area and soon DJ Kamoflage was regularly scheduled at the local events and nighclubs. He was playing everything from gigantic electronic raves, to underground HipHop shows, to rowdy dive-bars. But he was always looking for something more and always pushing his boundaries.

With the EDM and House music scenes steadily growing, large scale venues were looking for more professional DJ's that could read larger and larger audiences and still be able to send each individual home satisified. DJ Kamoflage was of the select few who fulfills this demand and very quickly he was playing at the best events in the beach cities, Hollywood, and Las Vegas; eventually landing residencies in some of the most popular venues. Demonstrating his talents on these platforms has also landed him guest appearances with some of the most respected artists today.

The mission for DJ Kamoflage now is to take his career international and he is quickly on his way. While steadily expanding into major cities in the United States, he is paving his path to worldwide recognition. He joined the ranks of several of the industry's biggest superstars when he began producing his own exclusive tracks. Teamed up with Berklee School of Music's own Dimension, DJ Kamoflage began releasing singles that transcend the HipHop and Electro platform and is signed to Lucent Records. Currently singles are for sale on iTunes and can be streamed on all major apps and sites. These singles have been featured on radio stations around the country and are in the process of hitting major airplay soon.

Several agencies and production studios are considering DJ Kamoflage as the next member of their team and as the plans come together, he continues to sharpen his skills and enhance his relevancy. His popularity as a DJ and respected artist are have transcended him to another artform: stand-up comedy. He currently resides in Ashland, Oregon where he is working on 2 professional projects and plans on a major worldwide tour soon.

Recommend this page on:

For Guest List or Table Reservations to any DJ Kamoflage Event: